What is Jolly Phonics and how it works for children

How Jolly Phonics works for Children?

But How does a child learn a language?

That’s where Phonics Comes in.

To teach a child how to read and write, the method of phonics is used. With phonics, children learn to use and identify the different sounds that distinguish one word from another in the English language.

It is done by learning the relationship between the sounds of the spoken language, and the letter or syllables of the written language.

What is Jolly Phonics?

Jolly Phonics uses the same principle as Phonetics but at the basic stages of learning a language. Here, teachers use interactive and fun visual and audio aids like poems, nursery rhymes, and games to teach the sounds of the words in the language.

Jolly Phonics is a fun way to learn for children as it encourages them to learn and enjoy at the same time.

How Does Jolly Phonics work?

Jolly Phonics is a fun and child-centered approach to learn as it uses the learning aids that interest children. It uses multi-sensory actions for all the 42 sounds of the English language and help children associate the sounds with the letters, letter group, and syllables.

Developed by Sue Lloyd and Sara Wernham, This program has proven to be the most effective way of Learning any language as it’s the fastest way to learn when compared to regular Phonetics. Considering this, schools and trainers across the world have adopted this method.

Now let us understand some technicalities.

While learning, students work on 5 Key skills. These skills form the basis of learning the language. 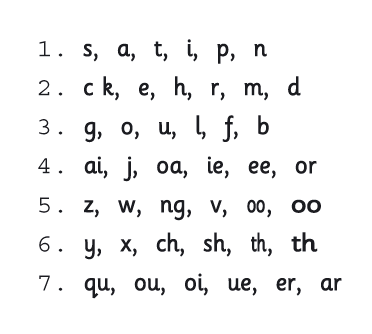 With regular practice, children can learn to form all the letters correctly in the first twelve weeks. 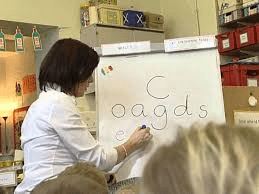 A word is formed when different sounds of letters are put together. This process of putting sounds together is called blending. While teaching, initially each word is articulated sound to sound and children are given the opportunity to hear the word.
Once they start understanding, they can form these words by blending the sounds themselves.

blending and segmentation in jolly phonics

Various sounds put together to make a word and it is crucial that children understand each sound the word is made of. Blending and segmentation are taught at the same time so that children can understand the phonic components of a word and become familiar with assembling and breaking down the sounds within words.

There are some special words or tricky words in English that have irregular spelling. Teaching these words can be tricky (hence the term Tricky words) as they cannot be worked out by blending and segmentation. So, these are taught separately to the children by gradually introducing them.

As you can see Teaching a language is not an easy job. It requires persistence, patience, and skill. The good news is Jolly phonics makes the process easier for the children and for trainers. Since jolly phonics is such a popular and interactive method, many trainers of language are now shifting to Jolly phonics.

Design with love by Mohit Mudgil

WhatsApp Chat is free, download and try it now here!